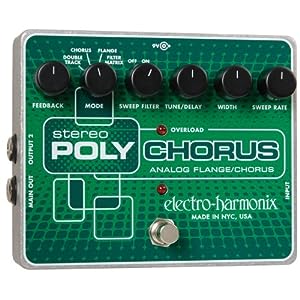 Today I wanted to talk about the Electro-Harmonix XO Stereo Polychorus. This is the classic ‘Nirvana’ effect used in “Come as you are”. The polychorus, as the name implies, is not just a chorus effect. It is an analog chorus effect, with flanger and slapback echo functionality and allowing you to combine all for some cool sounds and textures. Electro-Harmonix recently put this in their XO enclosure and changed some of controls. The original had ‘width’ and ‘plate’ and this version now has ‘sweep filter’ and ‘sweep rate’. The other controls are still there – ‘tune/delay’, ‘feedback’ and ‘mode’.

Here is the official description of the Electro-Harmonix XO Stereo Polychorus:

NOW IN THE NEW AND IMPROVED DIE CAST CHASSIS
The final word in analog chorus pedals. The classic that Kurt Cobain and Adrian Belew relied on to create their signature sounds. The Stereo Polychorus provides the lushest stereo chorus, rich chiming flange, and the over-the-edge effects that made this versatile pedal legendary.

I found this great video by EHX demoing some of the tones that you can get with the Stereo Polychorus, including the Nivana-esque tone as well as a very close King Crimson tone. Very cool.

You can pick up the Electro-Harmonix XO Stereo Polychorus for $222.00 at Amazon.com