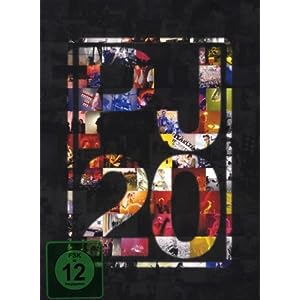 I finally got to watch PJ20 on American Masters/PBS on Friday night. I’ve been interested in catching this 20th anniversary documentary about the band Pearl Jam. Pearl Jam has been an interesting band for me throughout the years. I remember when Ten came out at the peak of the grunge era, I was very much into that band. I was fortunate to even see them during that tour in small venue here in Missoula, Montana (primarily due to the fact that Jeff Ament lives here).

The albums to follow, my interest in them faded. I’m not sure why. Could be the mainstream aspect of the band, or possibly the general direction of songs, etc. In fact there were times that I literally forgot and were surprised that they were still chugging along. Over the last few years though, I’ve been more and more interested in the band and some of the newer songs have really been catching my ear. I really admire artists/bands that really stick with their core ethics and belief, and not get blinded by the fame/cash. I think that would be hard to do, and with a multiple members in a band, I think it’s extremely difficult. Pearl Jam is a band that makes music for the sake of making great music for themselves and their fans. They’re not about following the money. That is something I have to tip my hat to.

Watching PJ20, I realized, I didn’t know much about the band at all. I mean I get the whole starting up and blowing up story, but I did forget about their battle with Ticket Master. Again, love what they believe in, with their focus of their fans. But I didn’t know about how they set up their setlists. I’ve always heard people collecting live recordings, but now I get it, because each show is quite different than the previous shows, and that is something special for an audience member, knowing something interesting can happen. The unpredictability and the spontaneity for the band members as well provides energy. I dig it!

Here are a couple of teasers/clips of Pearl Jam’s PJ20:

I’m not sure when this doc will be on PBS again (if at all), or if this will be a NetFlix deal, but you can pre-order Pearl Jam’s PJ20 Documentary off of Amazon for $16.99. This will be available (Oct 24). It definitely is a great doc to watch.