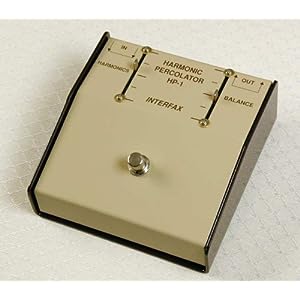 While I’m still on the Albini/Shellac kick and after receiving a few emails about his setup, I have to talk about the Interfax Harmonic Percolator. Albini uses this pedal for the crazy moments during the songs. As well as a moment where he was screaming into the guitar and generating microphonic output from the pickups.

The original Interfax Harmonic Percolators were created by Ed Giese of Interfax Electron in the 1970s, and I believe in Wisconsin somewhere. The original Harmonic Percolators are extremely hard to come by now-a-days, and there are a few reproductions, including the Pussy fuzz (by Mr. Bill from Guitar Works, Ltd), the Barge Concepts BP-1 (which I’m not a big fan of) and the Chuck Collins Harmonic Percolator Clone which is available now and is apparently the closest thing to the real deal out there.

The difficulty of reproducing the circuit of the original are… Ed Giese potted the original pedals. Basically gooped them so it’s hard to see the original values. I even heard that the the values were ‘sanded’ off the components when they were soldered. But tracing the paths can give you a glimpse of resistance and capacitance of some of the components. Additionally some of the transistors are some of the hard-to-find variety today. Regardless, you can find some schematics out there on the web, and definitely the components are can be found. The Chuck Collins version even matches the original enclosure and controls as the original.

Here is the official description by Chuck Collins:

The Harmonic Percolator is a distortion pedal that was made in Milwaukee Wisconsin in the 1970’s. It used a silicon NPN transistor and a germanium PNP transistor in a design that passes even order harmonics while suppressing odd order harmonics. These even order harmonics are more pleasing to the ear than odd order harmonics. This is the original circuit, not someone’s interpretation of it. The left slider is the input gain or distortion control and the right one is the Balance control. The input is on the left and the output is to the right when looking down on it. This is opposite pedals of today but in its time this made sense. Left to Right – the same way you read. This EXACT handmade duplicate of the original 1970’s pedal employs the same obsolete number Germanium transistor and same number Silicon transistor. (Op Amps were never used in Percolators) The silicon transistor was potted in the originals to discourage people from reading the number on it! Also used are the exact same number obsolete Germanium diodes. (They are NOT the common 1N34 or 1N60) Same type capacitors also are used. Mylar-Silver Mica, Tantalum, and Ceramic. The slider controls are the same as in the original. These New Old Stock parts have the original packing slip dated February 19, 1968! Three original pedals were dismantled to help create this duplicate. One Percolator was totally dismantled, all its parts removed and measured. (Thanks John D. Greg K. Rusty B. @ Rockhaus Guitars and Jay T. for trusting your pedals to me!). I am sure it was unsettling for the one original Percolator owner to have his pedal dismantled, the transistor removed AND heated up to about 150 degrees to loosen the wax holding the metal ring obscuring the part number. There are no hidden parts, no mis-labeled components, nothing unusual beyond the circuit itself!

Here are a couple of video clips worth watching on the subject. I know I’ve posted the full GearWire version in the past. Here is a clip where Albini goes into detail as to what the Harmonic Percolator is doing:

If you’re thinking about getting a Interfax Harmonic Percolator, your best bet might be with the Chuck Collins version, which is available at Amazon for $225

The softer side of Shellac’s Todd Trainer